On the final day of Pool Play the stakes got higher and the fans came out in droves to witness an epic night match with Kerri Walsh Jennings and April Ross who survived a match against their Brazilian Olympic foe.

Day Three saw the temperature rise on scenic Fort Lauderdale Beach, as furious action erupted on all six courts for twelve straight hours of world-class beach volleyball. In both men’s and women’s Pool Play, the top three pairs in each pool will get to advance to the round of 24. The prospect of elimination prompted urgency as teams scrambled to punch their tickets to the elimination rounds.

Hometown fans were overjoyed by the all-day rumbles on Center Court, starting with Phil Dalhausser and Nick Lucena taking on Russian young bloods Oleg Stoyanovskiy and Artem Yarzutkin. The match started out as a back and forth affair, which Dalhausser and Lucena squeaking out the first set 21-19, ultimately winning the match (21-19; 21-15).

Meanwhile, Alison and Bruno were in top form as the Men’s Round of 24 got underway in the afternoon.  The Brazilian all-stars barred it all on the sand, fighting tooth and nail against Marco and Esteban Grimalt, Chilean cousins who had nothing to lose. Fans watched breathlessly as the two teams skirmished for every inch of the court, ultimately ending in the third set with a last second victory for the roaring Brazilians, who advance into the Round of 16 in an awesome display of grit and style (19-21; 21-15; 18-16).

The afternoon crowd also witnessed Larissa and Talita play like the superstars they are, easily vanquishing the new American pair of Lauren Fendrick and Sara Hughes (21-17; 21-17) and Australians Louise Bawden and Nicole Laird (21-16; 21-17).  The Brazilian veterans are no strangers to success in Fort Lauderdale, having claimed victory in the 2015 World Tour Finals the last time Swatch Beach Majors visited the beachside city.  Fellow Brazilian powerhouses Agatha and Eduarda “Duda” also made themselves at home in the Sunshine State by winning their group and advancing to the round of 16.

And the best was saved for last, as the day ended with an epic rematch as Kerri Walsh-Jennings and April Ross looked to avenge their Rio loss against Barbara and her new partner Fernanda Alves. The raucous crowd cheered the American beach volleyball legends and the Brazilian duo as they split the first two sets. Ultimately the experience of Walsh-Jennings and Ross reigned supreme as they took the match (17-21; 21-18; 15-8) remaining undefeated in their pool group and earning themselves an automatic berth into the Round of 16. Barbara and Fernanda will also advance to the next round.

After the match, Walsh-Jennings had nothing but praise the fans that came out on Thursday night, “We want the crowd to keep coming every day, and just want to stay on the winning streak that we’re on. At this point every match is a must win.”

Looking ahead to Friday, fans can expect a spectacular show of skill from the remaining 16 men’s and 24 women’s teams who will face off in do-or-die matches. Beginning at 10:30 A.M., the Women’s Round of 24 will decide who moves onto the next round which will take place starting in the early afternoon. Meanwhile the Men’s division will complete both the Round of 16 and quarterfinals. This means that tomorrow the best men’s teams will be duking it out all day long to determine which pairs will battle to headline the final day of the men’s competition on Saturday, with the Men’s Final set for 4:30 P.M. 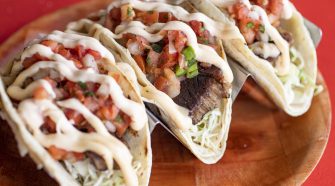