It has been over two months now since anyone’s been to anything resembling what we once called a concert.  Even with businesses starting to open up, six foot social distancing and facemask mandates make it difficult to imagine the rituals we’ve come to expect from a live music experience making a comeback any time soon.

Musicians are creative types though. Throughout quarantine they’ve been trying to replicate the musical intimacy  we once took for granted between a performer and an audience. South Florida high rises have experimented with balcony concerts where DJ’s and musicians serenaded tenants a safe distance away from their terraces. In Europe concerts have followed the format of drive-in movie theaters, with a performer on stage and each audience member in their own individual car.

But the most prevalent replacement for concerts in the COVID-19 era has been the live stream. Everyone from global celebrities that could pack stadiums to local bands that play your favorite dive bar to bedroom musicians who never before played in public have been streaming concerts.

As someone who grew up on MTV I get the appeal of vegging out and watching footage of musicians you love, but it was hard to see that as a substitution for attending a concert. But I’ve discovered younger souls who grew up with social media have found ways through livestreaming to transport the concert experience into their private residences.

You’ve probably used Zoom to have a business meeting or maybe to have a family reunion, but some are using the video conferencing app to bring the party into their quarantine. I tuned into one Zoom party live stream hosted by the South Florida based  All Day I Stream website a few weeks ago. While the DJ providing the music, Porky, wasn’t providing much entertainment, it was wild to scroll right and see how hard some of the attendees were partying. Of the 115 people in the room, it seemed like each was trying to outdo the other. Some were dancing like madmen. One woman was taking deep chugs from her wine bottle. I reached its apex of hedonism when I caught a pair of bare breasts motorboating their webcam.

While we’re going to have to be patient until scientists and government officials allow us to congregate to sing and dance to our favorite tunes, the desire to make and hear music is ingrained deep enough into humanity that social distancing be damned the beat will go on. 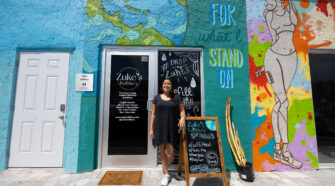