Periodic flooding every 28 days occurs from the Florida Keys, to the Las Olas Isles in Fort Lauderdale, on up the coast to Briny Breezes in Palm Beach County, to Annapolis MD, Newport RI, along San Francisco’s Embarcadero and low lying cities all over the world. It is becoming routine, predictable by the high tide tables.

Often called “king tides” this is a rather new phenomenon over just the last few decades. While some dismiss it as part of a natural cycle, generally they have little understanding about the patterns of changing ocean height. Many confuse king tides, storm surge, and rising sea level but sense that something different is happening.

Rising sea level is becoming a topic of conversation and for good reason. After a few thousand years of little change, sea level is now moving upward. In the last few decades the rise has been modest, but the trend is accelerating and will not stop for centuries. Understandably people are concerned, but there’s a lot of confusion and misinformation. What are the facts and what’s hype or hysteria?

If your house or street is underwater, the cause may seem academic, but there are several very different types of flooding. Storms, extreme tides, rainfall runoff, tsunamis, and rising sea level each affect different areas and have different recovery times.

Routine waves and super storms are easy enough to understand. Wind causes most waves. The height and wavelength vary by intensity and the distance over which the waves can develop (properly known as “the fetch.”) Storms cause severe wind and waves, with hurricanes being a super storm, also called “typhoons” in the Pacific.

Routine waves might be five feet high, with stormy weather possibly producing waves twenty feet or higher. When the wind dies, the waves die within a matter of hours, possibly a few days for a super storm. Life returns to normal. Waves mostly hit the beach. Storm surge may get into an inlet, and do damage on the inside canals too.

Tides are more stealthy and confusing. In most ocean areas the routine up and down pattern of sea height changes almost twice a day, with a full cycle roughly being six and a half hours. High tide is actually a bulge in the ocean that moves around the globe, caused by the gravitational pull of the planets. When the sun and moon are aligned, the pull is stronger causing a peak or extra high-tide. That happens every 28 days, following the full moon, hence the term “full moon high tide” (also called spring tide or lunar tide). Certain months of the year, other planets are also in alignment, making the force even stronger, pulling the ocean even higher.

Those peak high tides can be predicted down to the minute for any given location, years in advance. Boaters, fishers, and surfers consult the tide tables, either printed or online. Different locations have different tide ranges. Three feet is a common routine tide range, though some places are almost zero, and certain places, like Nova Scotia’s Bay of Fundy have daily tides in excess of twenty-five feet – mostly due to the moving bulge of ocean being trapped in a narrowing area, causing it effectively to pile up higher.

Tsunamis are a special kind of flooding as the world witnessed in the devastating events in Indonesia and Japan during the last decade. Those giant, fast moving sea waves are caused by underwater earthquakes.

Rising sea level is different than all those events, caused by a different force. Sea level change occurs much more slowly.  For sea level to rise noticeably, takes decades. To lower noticeably, it takes centuries.  Sea level has not changed much in the five thousand years or so of our civilization and written record. The geologic record however leaves no doubt that sea level does move up and down hundreds of feet, over thousands of years. The last time sea level was higher than present was 120,000 years ago. Then it reached twenty-five feet higher than today.

Most people think the cause of sea level rise is the melting polar ice caps. Not true. That ice around the North Pole, is floating sea ice. Giant icebergs and the ice cubes in your glass of ice tea behave similarly. They poke about 10% above the surface, but as they melt have no effect on the height of the liquid. Sea level rises for three primary reasons:

First, because the ice on land enters the ocean either as icebergs or melt-water, as would happen if you added an ice cube or more ice tea to your glass. The giant ice sheet on Greenland and nearly all of the 200,000 glaciers that are monitored have been melting more and more each of the last few decades, as the planet has warmed slightly.  So far that had added about three inches to global sea level, but the rate of rise is accelerating substantially.

The second reason is “thermal expansion” of the ocean itself. Like most materials, as the ocean warms it gets a tiny, tiny bit larger. The average depth of the world’s oceans is about 12,000 feet. Over the last century the ocean has been warmed approximately one and a half degrees F, causing the ocean to be almost four inches taller. The combination of melting ice from land and thermal expansion has amounted to about seven and a half inches of sea level rise during the last century.  The rate of rise is now increasing. In the last decade or two, the rate is now about 1.2 inches per decade.

The third reason for changing sea level is a local or regional one. Land can move up or down, described as uplift or subsidence. It’s hard to notice because like sea level the amounts are usually fractions of an inch per year.  The causes can be the moving plates of the Earth’s crust (tectonic), compacting soils, or the extraction of ground water or petroleum, causing the ground to settle. The changes in ground elevation, can add to, or subtract from global sea level change.

For example, in the area of Norfolk Virginia, the plate moved down roughly 22 inches over the last century, combining with the eight inches of global sea level, to make local sea level about 30 inches higher.  On the other hand, Los Angeles was raised about 4 inches by the Pacific plate being forced underneath California, reducing apparent sea level by that amount.

The burning of fossil fuels puts carbon dioxide up in the atmosphere. That “CO2” is transparent, but traps heat, just like a sheet of glass, hence the term “greenhouse effect.” It is a basic function of chemistry and physics. CO2 levels are now at 400 ppm (parts per million) and rising rapidly, much higher than the natural range of 180 – 280 ppm that has existed over the last ten million years of geologic history. That is the underlying reason for the warming.

A lot of effort these days is focused on reducing the warming, sometimes called “mitigation.” Efforts to reduce carbon footprints and to be more sustainable and green are focused on reducing the rate of warming. Those good efforts may prevent sea level from rising at catastrophic rates. Yet the fact is that the warmer oceans mean the ice sheets will keep getting small, raising sea level for a very long time, regardless of the efforts to slow the warming.

Sea level rise needs to be looked at separately from storm surge and peak tides, because it becomes essentially a permanent (thousands of years) increase to the base level––the low tide level. Higher sea level does not hit the beach like a storm wave, but rather will work its way to the lowest areas, far inland, or up tidal rivers.

Fortunately the process of melting ice, raising sea level, and gradually shifting the shoreline is a gradual one––not like storm surges or even extreme high tides. We have time to adapt to slowly rising sea level.  We can think of that as the positive aspect of this new phenomenon. Some might call it the glass half full—and getting higher.

JOHN ENGLANDER is an oceanographer, well known as an expert on rising sea level. His best selling book, High Tide On Main Street: Rising Sea Level and the Coming Coastal Crisis (published 2012 by The Science Bookshelf) is widely recognized as the best explanation of the issue, translating the latest science into plain language. As President of the Rising Seas Group, he conducts briefings and workshops for governments, military and national security groups, communities, and businesses, so they understand the science and can begin “intelligent adaptation.”

Next Subculture Coffee Takes Your Daily Cup To Another Level 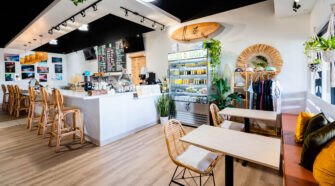