For anyone who says Florida doesn’t have its own barbecue, there’s a West Palm Beach chef who’s challenging that sentiment.

Former Café Boulud executive chef Rick Mace is channeling his own inner buccaneer at Tropical Smokehouse. The latest addition to the Dixie Highway Corridor restaurant row, the restaurant is a joint venture between Mazie’s co-founder Jason Lakow and the long-time Café Boulud chef, who together pay homage to the culture and foods of the Sunshine State via smoked fare.

“When it comes to cooking in the U.S., so much is homogenized,” he tells The Atlantic Current. “You can find the same products and menu almost anywhere you go. One day, a friend asked me, ‘Isn’t it your job to change that?’ That was the lightbulb moment for me.”

Mace, who moved to Florida in 2014 to helm the kitchen at Café Boulud, grew up on a 100-acre farm in Ohio. For him, barbecue was a part of life.

To make it Florida barbecue, however, his inspiration went straight to the source: the state’s early indigenous population who were among the first to develop their own style of barbecue, smoking meats and fish on thatched palm fronds balanced over smoldering embers.

At Tropical Smokehouse, diners will find dishes they’d be hard-pressed to find anywhere else — or executed by a chef with the resume Mace offers — with regionality that comes into focus with smoked pork, gator and fish.

While the nation’s recent craft barbecue revival has served to highlight the iconic meats and techniques, it hasn’t done justice to the subtle nuances of regional variation, Mace said.

For Florida barbecue, that means looking to the coastal waters rife with local catches and heritage breed of pork thought to come from early Spanish settlers in St. Augustine.

“All these elements made sense, and my goal was to weave that into a restaurant and showcase that story with food that is not only interesting and unique, but also has a strong sense of place,” Mace said.

After a 20-year career focused on fine dining, Mace said his goal was to get back to his roots and have fun.

“Now, I’m doing what feels like me, and barbecue was always that thing that felt good, homey and me,” Mace said. “Truly good barbecue is so much about patience.”

That’s especially true of his smoked fish, which is what separates this smokehouse from those that focus solely on meats.

The duo didn’t plan to open the restaurant with brisket on the menu, but quickly learned it was something people craved. To remedy that, Mace recently put his own iteration on the menu, which included slow-cooked chicken, turkey, and pork done two ways.

The spotlight, however, is on the kitchen’s hand-built, cabin-style smoker. Crafted by Mace himself, the month-long project that drew a hard line from his time in Boulud’s fancy French kitchen to his own blood, sweat, and tears-inspired barbecue.

Like any restaurant, the chef strives for consistency, with each filet of Cobia, Mahi-mahi, or salmon cured overnight with a simple salt and brown sugar rub before it’s cooked low and slow — no more than 175 degrees — for up to several hours. The fish emerges tender and moist enough to flake beneath your fork, kissed with smoke.

“I knew right away that I wanted the fish to be the heart of the menu,” Mace said.

The menu of some 50 items leaves plenty of room to explore, opening with Mace’s ubiquitous TSH Smoked Fish Dip — a marriage of the three fish you’ll find on the menu — a wet dip that ascribes to Mace’s top tenant: it must not break the chip when you dip. Prepared with Duke’s mayo, sweet hot pickles, lime, cilantro, and a hint of Worcestershire sauce and pickle juice, it’s a traditional favorite done right.

If platter or dip isn’t to your taste, you can also find the smoked fish in the crispy fish sandwich. A recent addition to the menu, it’s presented as a generous cut of smoked Cobia. Finished in the larger cooker reserved for meats,
it offers a depth of smokey flavor before it’s battered and fried and fitted between a Martin’s potato roll with house-made tartar sauce. Perhaps the most Florida dish on the menu, however, is the gator.

Mace says he has a newfound appreciation for harvesting gator as food after helping friends haul in an 11-foot specimen from a night hunting on Lake Okeechobee. The often tough, chewy white meat initially found its way onto the Tropical Smokehouse menu as fried gator bites, but the chef knew there was a better way to work it.

Today, it’s served as an Andouille-style sausage, a recipe Mace has developed over the years that renders gator flesh into tender nibs. Mixed with pork belly and cured with flavors of chili, bay leaf, nutmeg, and brown sugar, the sausage is smoked and pan-seared be- fore it’s sliced and served, offered up simply with the house coleslaw and pickles.

“To go from a chef in a French kitchen to hands-on handyman of my own barbecue restaurant has been very rewarding,” Mace said. “We’ve been getting great feedback, and that means people don’t just understand what we’re trying to do here. They’re embracing it.”

Art on the Slide Holiday Edition 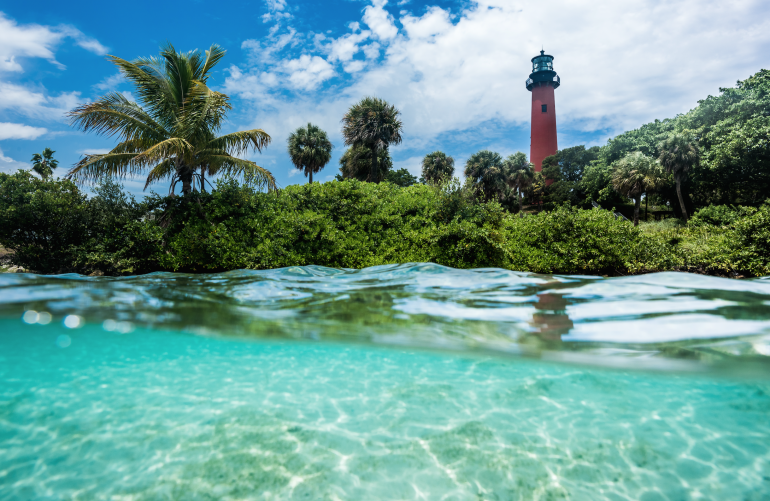