We hope you enjoy our feature on Amber in our latest edition of The Atlantic Current, which was released on May 1.  To pick up your copy see the list of distribution locations on our website.  Following is the full interview with Amber, edited only for clarity and brevity…..

TAC:  We downloaded your new CD and we really like it—-“Make (You) Believe” is almost all  instrumental.  Why go instrumental this time?

Amber:  Well, when we play live we do a lot of instrumental music and about 10-12 years ago began doing all the Celtic and Irish songs and started incorporating it really slowly —–we’re a country band but I’ve always loved Celtic fiddle so for me personally I wanted to incorporate that music into the show and it just seemed like a really good fit—-every time we’d do a Celtic song, wherever we were playing people would get into it and we never met anyone who didn’t enjoy it, so as the years progressed it started to become a staple in our live shows.  All of our albums have been pop/country, crossover stuff but we had this large following of people who would come to our shows just for the Celtic stuff and everyone wanted to know where they could get that music so doing an instrumental album was sort of on the bucket list for me.  So we went into the studio and recorded all the songs we’d been doing for years live. We changed up a few things and freshened up some of the traditional songs to give them a rockier edge.  Even though the album is instrumental we had to add “Devil Went Down To Georgia” at the end because everyone loves that song and we’d never recorded it.

TAC:  One thing we didn’t expect was that you dropped in a few bars of “Kashmir” from Led Zeppelin which is pretty awesome…

Amber:  Yeah, that came from a previous idea—my Dad who’s been our guitar player forever —-we had been doing a dueling banjos thing ever since I was a kid and it was always the duel between guitar and fiddle and we’d try to outplay each other and he would throw in “Smoke On The Water” (Deep Purple)  and everybody loved that (laughing) then after that we’d to “Devil Went Down To Georgia” and I’d throw in “Kashmir” so that’s where that came from.

TAC:  So….how did you get up in a tree for your cover shoot, and in a dress no less.

Amber:  This is a great story and a great question!  So………..that tree is actually not far from where I live, in the middle of the woods and I was scoping out the place and I had the concept for the photography for this album—I wanted it to be very whimsical and fun and wanted to do something that wasn’t commercial or something we’d done before.  So I got all these fluffy dresses and sent the photographer a picture of this tree and said “hey, I want to do this at night, when it’s really dark”.  So it’s time to shoot and we go out to the tree and my husband’s with me and the tree is much taller than they expected it to be so we had a ladder and we had a flashlight, and the tree is covered in termites, red ants, spiders, all these insects—-and we had bug spray so we sprayed the tree, which only made things worse…..so we thought we’d just do pictures on the ground beside the tree but I really wanted to get in it for this one picture.  But the bugs wouldn’t settle down so for the very last picture I got on my husband’s shoulders and climbed in the tree, the most uncomfortable thing ever, it was pitch black and I could feel all the bugs crawling up my legs, arms, all over me so I said “please just snap snap snap, just get the photo” —and I just had to find a very happy place.  In post-production I could see all the spiders all over me, so I photo shopped them out.  So for a while there I was one with nature!

TAC:  Back to music—in south Florida there’s a big international influence, a lot of reggae, a lot of world kind of stuff but there’s a more blue grassy vibe emerging with bands like yours, Uproot Hootenanny, and others—-why do you think this is?

Amber:  I think around here people are open to all kinds of music. You know, when you go to different places, like the Midwest for example they really like country music so we don’t do as much instrumental stuff. It’s just a melting pot of people around here —I think everyone likes to hear really good music and I think it’s nice to hear music that’s just different.

TAC:  You and your band give back to the community –what are some organizations that are important to you?

Amber:  We work with a lot of different organizations.  A big one for me is giving to animals—we’re actually planning a concert with a lot of different bands in Delray and the whole thing will be geared to help local rescues.  We also work with the Wounded Warriors Project and they are awesome; we’ve worked with them for years and years, every time they call we try to do all we can and play and raise money for them.

TAC:  What’s the date for the big concert in Delray?

Amber:  Probably late October/early November.  It’ll be in Old School Square and will be an all day concert where you can bring your dogs and we’ll have rescues set up, a big doggie day with music basically.

TAC:  So, what’s in the works for your next CD?

Amber:  Next one will be country/pop—-everyone is already talking about doing another instrumental album –we have all the material for it and we’re ready to do it, but we’ll probably do back and forth, country/pop then instrumental.

TAC:  And when will the new album come out?

Amber:  Ummmm…that’s a good question (laughing) —we’ll probably release a couple of singles in June or July and probably a few more in the late Fall

Thanks to Amber for a great interview.  Pick up her latest, “Make (You) Believe” on iTunes or visit amberleigh.com and order.  For show dates visit her website and the events calendar on theatlanticcurrent.com 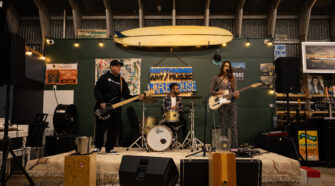