Brian Trew began his love with the music world at age 11 when he first picked up the viola in his middle school orchestra. Instantly hooked, he and his friends created an Irish folk group, Celtic Rogues, and were heavily influenced by Celtic groups such as The Chieftains, Altan, and The Clancy Brothers, as well as a healthy dose of country and southern rock. He continued to play viola and violin in the FAU orchestra, where he attended college, and had the good fortune of meeting Uproot Hootenanny his junior year. He’s been playing fiddle with the group ever since, and brings his Celtic style, along with Charlie Daniels, Gary Stewart and the Nitty Gritty Dirt Band influences, to the already unique sound of the Hoot band. So, what does this musician listen to when he’s not finessing the fiddle? You asked, he answered.

This guy is incredible! His picking is mesmerizing and his band is taking over the bluegrass/jam band scene. This song is just straight, hard-driving bluegrass.

I grew up on old country and Honky Tonk. My Uncle Billy played electric guitar every weekend in a little bar in Fort Pierce, and this song from Tyler Childers has that sound that I love so much. It’s really cool to hear a young guy have a fresh take on old country.

Town Mountain, “Lawdog” from the Leave The Bottle album

This is the Hootenanny’s go-to song when we all get in the van and head on tour. They have such a classic bluegrass sound. I can’t listen to it enough!

This song showcases three brilliant musicians pushing the boundaries of acoustic music. They blend bluegrass, jazz, traditional and old-time seamlessly. Lyndsay Pruett’s fiddle style on this tune is so original and effortless. I’ve never heard anything like it.

I had a chance to play a festival with these guys in Ireland this past September. I’ve always listened to traditional Irish music, and this tune from Moxie has shown what progression can do to tradition. They bring the craic (“fun”) on stage, and their performance was one of the highlights of the festival.

Previous What the Chef Eats at Luff's Fish House 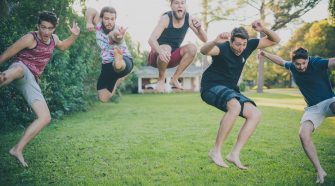 Local Bands The Helmsmen and Moska Project Open for Matisyahu