Our art scene is crowded. Which is a good thing, because competition brings out the best, and it certainly has put Amanda Valdes and her spooky female characters in the spotlight. Acting out a childhood dream, Valdes simply paints situations near and dear to her heart, with one character and a myriad of tiny details, bright colors and personal references. Most of all, her work reveals her uniquely dark but also bright perspective on daily life in South Florida.

The smell hit me first. Because it was spray paint I knew a vapor cloud would follow that smell, so I held my breath and clamped my eyes shut. After a few seconds later I squint open my right eye. Coast is clear. As I move a few steps to my right so that I’m no longer down wind from Amanda Valdes and her spray paint, I ask what color is coming out of the can because it is some combination of blue and green.

“Mint, I think,” she says, while wafting the color vapor down the right side of her Willow Charcoal-sketched mermaid body. 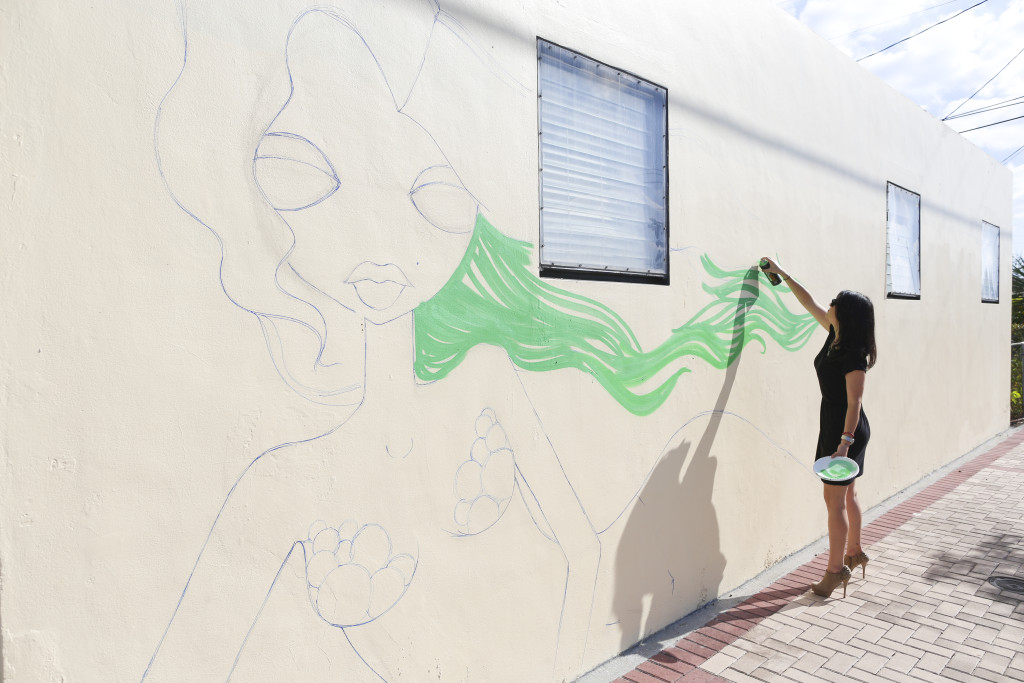 But this isn’t a typical mermaid. It is not a Disney princess who can breathe underwater. It does not look like Ariel and this mermaid does not look like it resides in an enchanted underwater city. It is an Amanda Valdes inspired mermaid, which is to say that it’s going to be a bit different.

Take for example the eyes. As she continues to color in the lower torso, I look farther up the mural and see that the eyes of this mermaid are large, sketched out ovals, but I see no pupils. I look at the printed prototype image she handed me earlier, and it shows no pupils as well. This tiny detail makes the sketch look thus far eerie. Odd. Ghoulish. Like a mermaid for Halloween. So I ask her intentions.

“I really like to create a contrast with my paintings,” she says, looking towards me over her left shoulder. “I do have dark undertones, but I also like to have light, bright colors.”

“Hence the mint color,” I say. She turns around to look at me. “Yeah, I think that creates an edge, or an uneasiness that makes people take a second look or take a little bit more time to look at,” she says, and continues coloring in the body.

Which is exactly what’s happening right now. As she continues to color in the body of her mermaid, which is thin, featuring a seashell bra, a slender neck, those big eyes with no pupils, and bright green hair that is waving across the side of the building, cars are slowing down. A few people on their early morning walk have already stopped and stared. And the mural on the side of this antique shop is only thus far a sketch
and some green hair and a mint body. Just enough for others to see that it is a very, very different mermaid. But just enough to entice passersby on Amanda’s work which has been defined as “pop surreal” and “something in between reality and fantasy.” 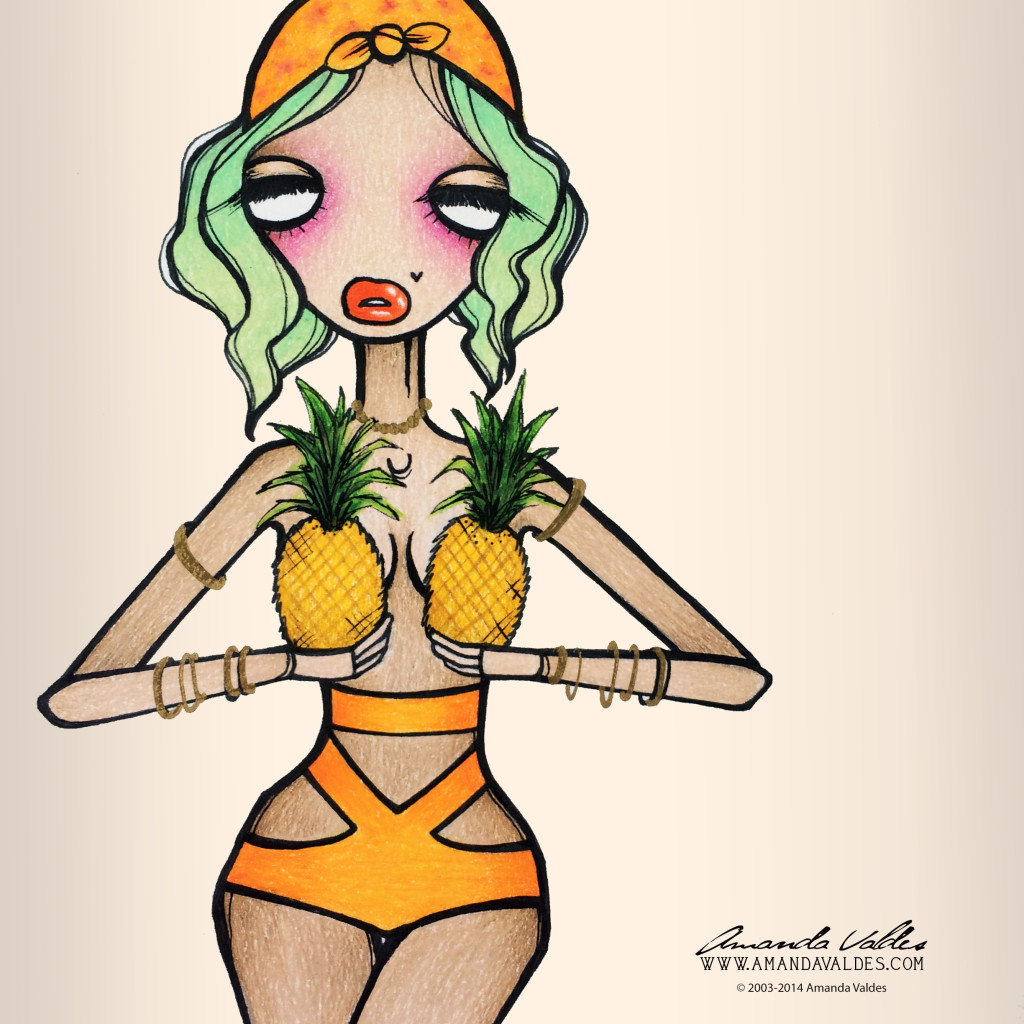 The mural she is currently painting is on a side of a shop in Northwood Village, an art-concentrated area of West Palm Beach just a stone’s throw from Clematis. Theoretically, if you picked up that stone from Northwood Village and threw it back towards Clematis Street, you’d probably hit one of her other murals, which sits inside of Respectable Street. And if you took that same stone and threw it a little further south, you’d hit another one of her murals, which fills an entire wall at the local trendy hotspot diner called Howley’s. It’s been there for 5 years now. Take that stone a mile east to the simmering Atlantic and skip it on the water towards Miami, and you’ll hit more and more locations of her work down the coast. Galleries. More murals. Even on television, too. Her work was featured on Vanilla Ice’s DIY Network Show in both seasons 2 and 4.

She recalls herself as a toddler in Palm Beach Gardens, fingers wet and colorful with finger paint, rolling around in oversized sheets of paper and looking like a burrito. She had her first solo exhibition at 18, and refined her skills at the Art Institute in Ft. Lauderdale. While working a full time job, her co-workers saw her art for the first time and offered persuasive encouragement. To take that next step. To trust her talent and work ethic. To show her work anywhere and everywhere. Which has paid off, because as she finishes coloring the mermaid tail and reaches for another can of spray paint, three more cars stop to see what she’s creating. I feel famous just standing near her.

At this point, paint is scattered over her toes, only covered by sandals, and the morning sun hits her brown eyes and I notice that she doesn’t look content. She has so much more to do on the mural. Everything is already sketched on the first mermaid, but the tail needs to be painted, the face colored and another mermaid must be sketched and colored on the opposite side of the wall, and the entire background of that same wall needs to be splashed with a darker color to match the mood. She also needs to add in hooks and fish skeletons to embrace the full underwater experience.

And that’s exactly what happens next, and when the tail is complete, she pauses and looks up. I have to take 2 steps back from the wall in order to crunch the entire painting within my peripheral vision. There’s still so much to do, but the 40-50 hours she usually spends on a mural painting will not be done today. It’s still the morning, and it’s an oddly sweltering December day. 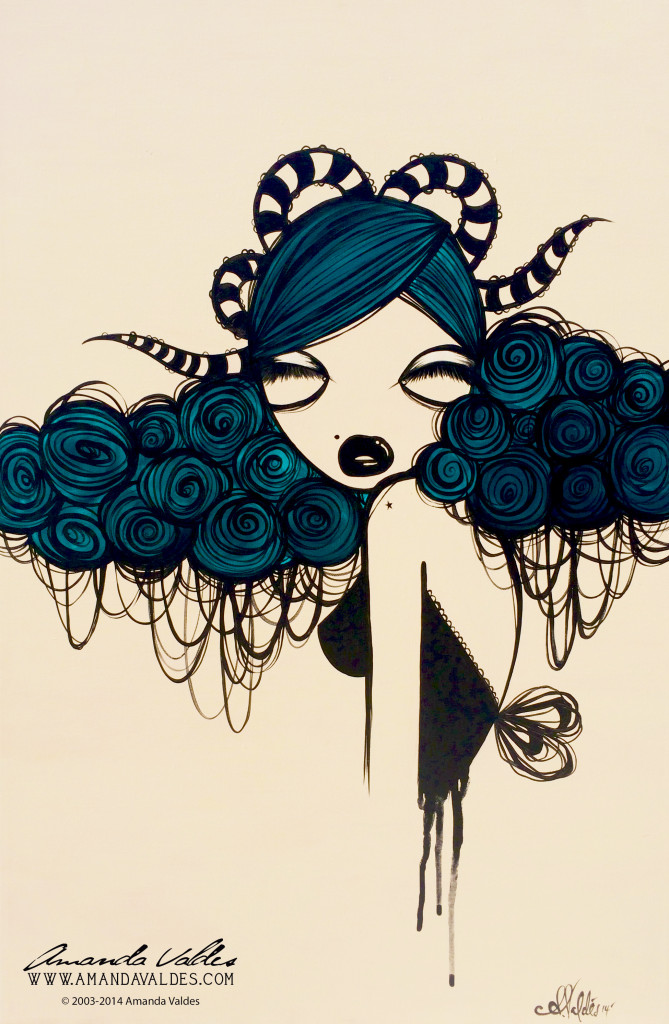 She places her art supplies back in the massive duffle bag filled to the brim with other cans and paint and brushes and probably more, and we walk across the street towards the local gallery called Arthouse 429. Inside, paintings, sculptures and photos are methodically placed on whitewashed walls. It doesn’t take me long to spot the corner where Amanda’s paintings hang, because once you’ve seen her female creatures, you’ll recognize them anywhere. They make me take a second look out of curiosity. There are no pupils on the characters in each painting, and everyone is different, besides the figure and the bright colors. Every scene tells a piece of Amanda’s life, something that can be difficult to comment on, in her eyes. If the aforementioned characteristics drew me into the paintings, her incredible details keep me there. Looking over and over again.

Suddenly I turn around to look for Amanda, but she’s off in another corner of the gallery, not even taking a glance at her work. What she’s done doesn’t seem to be on her mind. What seems to be on her mind is the incomplete mural outside. Tomorrow, she’s going to put in more time on the mermaid. The following day, too.

And next week? I wouldn’t be surprised if she’s commissioned to work on another enormous mural in the area. Or on another painting or another exhibit. She’s known, and her art is wanted. And thanks to a consistent focus, decades of work and refinement and a unique style, supply and demand within the local industry seems to be working for Amanda Valdes like a work of art.

Visit www.amandavaldes.com to purchase some of Amanda’s amazing work and follow her on social media @amandavaldes

Next Barrel of Monks Brewing Opens Strong in Boca Raton 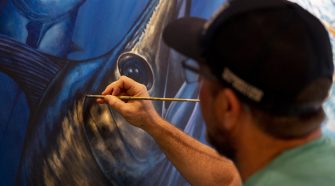