In Jamaican Patois the word “artikal” is defined as “top notch;” one must command an understanding of this Jamaican slang word to grasp what the four ace members of local rocking- reggae act ARTIKaL Sound System are striving for. Each musician — front man/vocalist Chris Montague, bassist Fabian Acuña, keyboardist Chris Cope, and drummer Tristan McNeil — is  much too humble to take on the hefty designation alone, but together, this Delray Beach-based quartet produces the kind of Caribbean-influenced riddim that’s destined to make it one of South Florida’s premier reggae acts. The group is on the verge of releasing their first record of originally written material, Inversion, and although ARTIKaL Sound System may still be an artist on the rise, the road that this dub-heavy four-piece has taken to the top has aligned it with the finest, first-rate acts from the world of reggae.

For years now, ARTIKaL Sound System has been cutting their teeth by backing some of Reggae’s biggest players. They toured Puerto Rico with pioneering ‘70s -reggae act Abyssinians, and have supported reggae royalty by touring and recording with Bob Marley’s grandson, Biggz General. He’s not the only Marley offspring ARTIKaL has shared the stage with, the troupe also did a string of Florida shows with another Marley grandkid—Alex Marley.

All the while lead singer Chris Montague has been like  a sponge, picking up bits and pieces of  inspiration from each one of these artist’s ethos. “I most admired their energy, interaction, and spirit,” explained the upbeat and personable front man.  The Atlantic Current had the good fortune to catch up with the musical dynamo on his lone day off, Sunday, where he was taking a breather from teaching music six-days-a-week at his own business, SoFlo Music School.

We asked him, out of all the legendary artists his group has supported, which proved the most influential?  “I can’t pick just one,” shrugged Montague, telling us each and every artist was “sick,” in their own way. “ I feel most influenced by [their] underlying spirit and message,” he stated.

To better understand the history of his band’s rise, however,  Montague pointed out, we have to break it down from the top of South Florida’s reggae scene. The core of the group,  Montague and Acuña, have been playing in a band together for over eight years, after meeting at Florida Atlantic University. In that time, the fellas have jammed with, rubbed elbows with, or recorded with just about every notable South Florida reggae musician. “Our band is a culmination of the epic scene we have in South Florida,” he added.

Taking it back to 2008, when his group was known as Stampede Movement, the four-piece shared warehouse space with ska punk-tinged act Spred the Dub and Deerfield Beach rootsy revivalist The Resolvers.  It was through their affiliation with these South Florida up-and-comers that the band caught the eye of reggae-pop idols Inner Circle (best known for their infectious hit “Bad Boys,” [better  known as the theme song to reality TV show COPS.]

Along with Spred the Dub, and the Resolvers, Stampede Movement  was tapped by Inner Circle to participate in a project called The Reggae Wave. This compilation disc, spearheaded by Inner Circle,  invited a “who’s  who” among South Florida reggae acts (which also included  local standouts Roots Shakedown, and Fourth Dimension)  to record two songs at Inner Circle’s masterful Miami studio, Circle House Studios. This connection served as a “catalyst,” Montague said. Through their affiliation with Inner Circle the group was introduced  to other reggae legends like Steel Pulse and Third World, and linked up with old- school reggae act Abyssinians.

The funny thing is, none of the four members of the ARTIKaL Sound System come from a Caribbean background. The drummer, Tristan McNeil, is British and grew up playing gospel music, Acuña is Venezuelan, current keyboardist Chris Cope is Florida born-and-bred, and Montague, well he’s just a Maryland boy. “None of us grew up listening to reggae,” admitted Montague, explaining that his group’s affiliation to reggae music is a product of circumstance.  “The biggest reggae stars in the world travel through South Florida, and we’ve all had access to that, we’ve grown to share a profound love for the genre.”

The quartet’s deep admiration for reggae truly shines through their forthcoming effort Inversion — the title that’s a reference to the group coming full circle by reuniting with Stampede Movement’s original drummer, McNeil. Overall, Montague says he’s connected with reggae’s desire to “spread positivity and awareness to [your] surroundings.”  He pointed out his group comes with a certain political edge too. Perhaps no track more evident of this than “Take the Power Back,” one of Inversion’s hardest-hitting numbers, where Montague strikes chiming guitar licks in the vein of punk/reggae hybrid  311.

“So many people  spend their time on Facebook complaining about what’s wrong with the world,” explained Montague, “but if we really want to sculpt a better reality, we have to do it ourselves,” he said about the song’s core message.

Inversion provides a platform for Montague to spread  his message, this record being the first time Montague sits behind the driver’s seat. ARTIKaL’s  previous  eponymous effort featured lyrics written by then collaborators, Trinidadian artists Red Lyte  and Marley descendant, Biggz General.  Inversion  has  the ARTIKaL boys stepping  out into the fold for the first time, and Montague says, it’s afforded him the ability to write lyrics that “hit way closer to home.”

Montague draws from personal experience  in “What They Need,”  for example. This mellow -flowing, skank-guitar-stoking track reflects back to a time when Montague was a music teacher at a Boca Raton private school. “I felt so frustrated, fighting to win these kids’ attention,” he explained. “Nowadays it’s a struggle to get kids to put down their cell phones and focus, with all the technology afforded them, it can seem like a losing battle.”

Being the first time Montague takes the lead in the band, we wondered if he felt more comfortable in the spotlight? “I don’t know if I’d use the word spotlight, I don’t like to be flashy, but I would admit to feeling  more ownership over what I  am doing.”

Playing together as a four-piece for over a year now, the ARTIKaL Sound System guys are ready to strike out on their own. Inversion is set to come out any day now, after (coming full circle once again,) it gets mix and mastered at Inner Circle’s studio.

Next Into The Wild At Gumbo Limbo 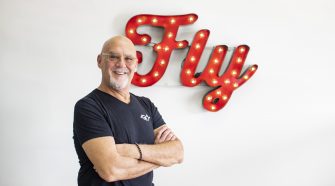