Over the last eight years the Funky Buddha Brewery brand has gained recognition throughout South Florida, and their reputation has permeated throughout the entire craft beer world. Originating in Boca Raton, Funky Buddha Lounge and Brewery quickly gathered a following, resulting in Owner Ryan Sentz seeking a space that would accommodate the unpredictable growth. Sentz partnered up with his brother KC and a much larger Funky Buddha Brewery in Oakland Park became a reality. The new facility opened its doors in June of 2013. Funky Buddha has produced over one hundred brew creations that are available for purchase within the brewery as well as local restaurants and supermarkets. As a company that strives to be constantly evolving, Funky Buddha launched their Craft Food Counter and Kitchen on November 11, 2015. A premeditated leap in the business, Ryan and KC were driven to offer food at the brewery since its original opening. 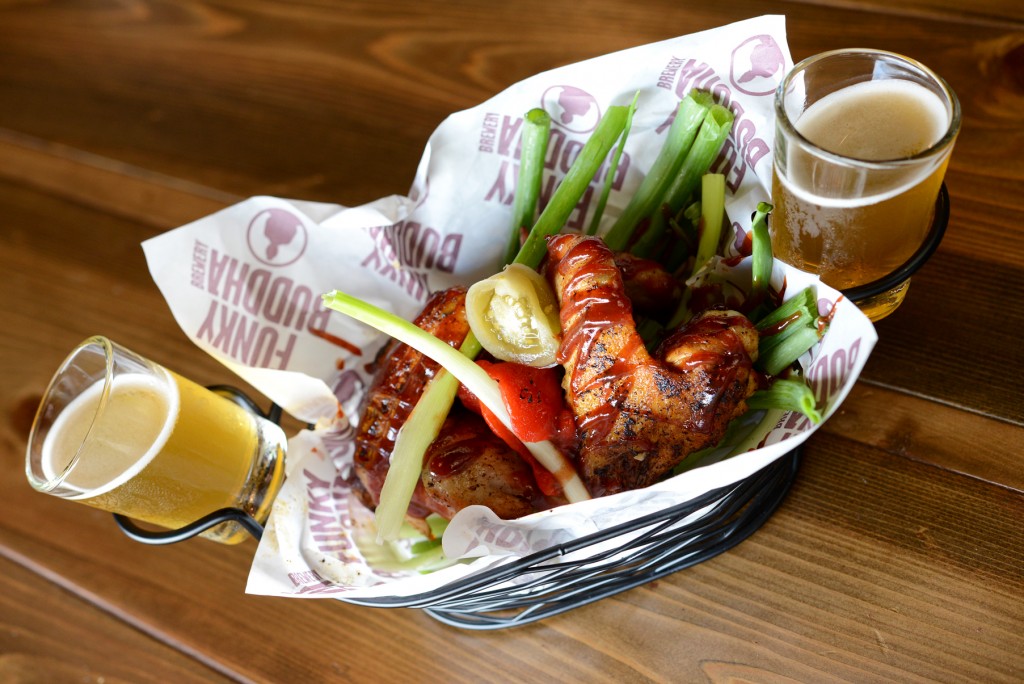 Naturally, the main focus for the brewery in the early stages was to keep up with demand while continuously consummating new brew creations. Then, food trucks entered the scene and became a growing collaboration with South Florida breweries. Funky Buddha continues to host a number of food trucks throughout the week, affording guests the option to soak up their beer drenched stomachs as well as quench their appetites. Albeit this dynamic appeased the masses, the vision was not complete. The master brewers of Funky Buddha generate each batch of beer from start to finish. Throughout this intimate process, the brewers are well-versed on every ingredient that goes into making the beer. This know-how translated well when determining what culinary fare would best suit one of Funky Buddha’s own beers. To offer a beer and a dish that go hand in hand was the main objective, and having in-house control enabled the team to synergize the two. Ryan and KC knew the direction they wanted to thrust Funky Buddha into, and so began the inauguration of the Craft Food Counter and Kitchen (CFCnK). 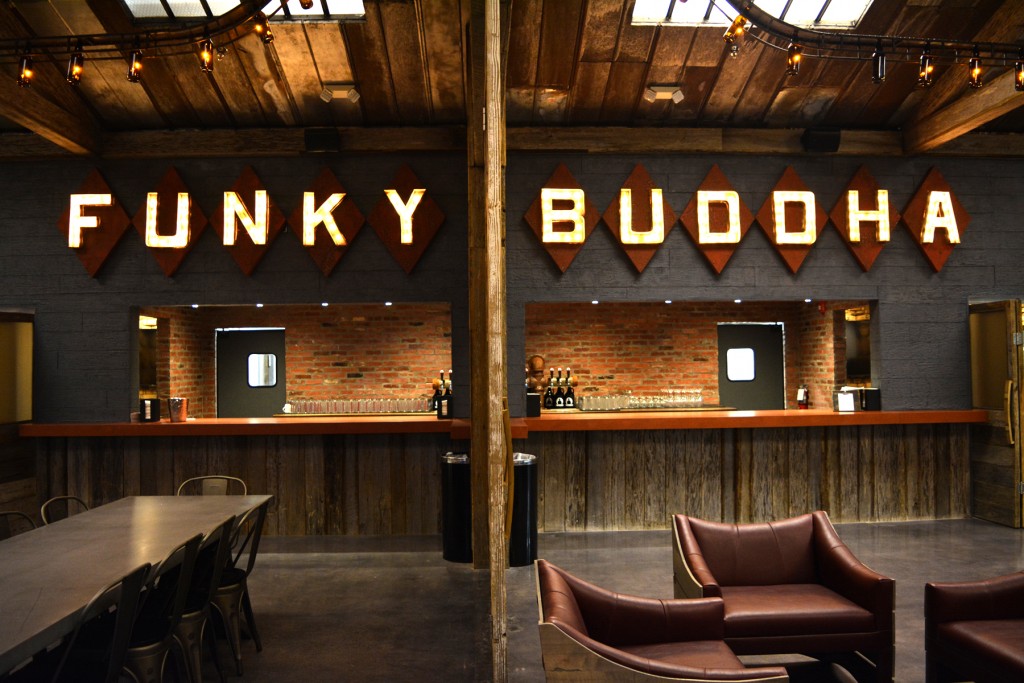 Having worked with a multitude of restaurants on pairing events, the curators at Funky Buddha have become acquainted with varied local Chefs. Chef Jeff Vincent, former head chef at the Beauty and the Feast in the Atlantic Hotel in Ft. Lauderdale, joined the Funky Buddha family as head of the CFCnK. Hailing from South Carolina, Jeff constructed the menu to be a southern inspired “Scratch made pub fare,” according to Brand Director John Linn. Every dish on the menu has been procreated with Funky Buddha’s beer as the mainspring. To take it a step further, many of the items are actually cooked and prepared with a specifically selected beer. In the week of its unveiling, the CFCnK has already dubbed a few menu items as quintessential. The “Tap Room Pretzel” is made with spent grains (leftover grain from brewing process), and is offered with “Doc Brown Mustard”— which derives its name from Funky Buddha’s own Doc Brown Ale. The “Fuhgeddaboudit Beer Cheese” a medley of aged cheddar, Smokey Gouda, and the aforementioned Fuhgeddaboudit Red Ale is served in a Floridian (Hefeweizan) Sourdough bowl. An exemplary dish is the “Chicken ‘N’ Biscuit” which not only embodies Funky Buddha’s own beer, but also displays Chef Vincent’s incredible southern flair, including battered chicken, a “big ass beer cheddar biscuit” (made with the Fuhgeddaboudit Red Ale), topped with “sawmill gravy”.  Each dish is complemented with a suggested pairing of in-house brews. Much like the “limited edition” beers available at any given time, Chef Jeff Vincent leaks sporadic creative innovations that are available as daily specials. The most recent special consisted of two guava glazed chicken tacos dressed with four pepper black bean salsa and avocado-cilantro crema. All of the palatable dishes put forth by Chef Jeff  Vincent are made in house. 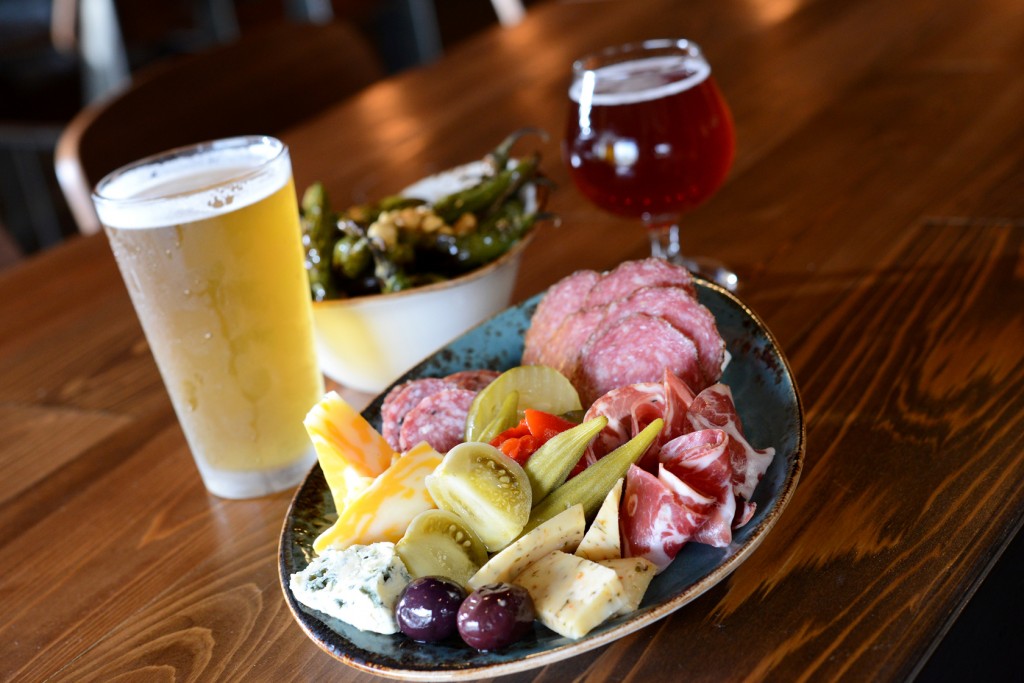 Due to a generation that is growing fonder of fast-casual dining, Funky Buddha’s CFCnK has been organized to fit this mold. The order of business is as follows: A customer orders at the kitchen window, in turn they receive a buzzer, then the customer enjoys another beer and a round of corn hole. Once the buzzer goes off, the food is readily available around the corner from where they ordered at the pick-up window. A common misconception is the idea that if food is fast, it is not fresh. This is a fallacy in the world of Funky Buddha. The kitchen is a “scratch kitchen”, which is food lingo for a kitchen that prepares and cooks everything from the ground up, figuratively speaking. Funky Buddha sources their ingredients, for both the food and beer, from local purveyors; many of which are within a five mile radius. Brand Director John Linn told us that the Whole Foods Pompano Bake House uses spent grains from Funky Buddha’s brew process to make their sourdough bread, which is then served at the CFCnK. The spent grains are used in other dishes on the menu as well, such as the “Dr. FeelGood Veggie Burger” comprised of chick peas, quinoa, and spent grains, topped with lemon herb aioli on a spinach focaccia. Militello’s in Ft. Lauderdale bakes Funky Buddha’s challahs and focaccias. Because this network of atypical businesses works reciprocally together, the consumer is afforded a pure, “farm to table” experience. 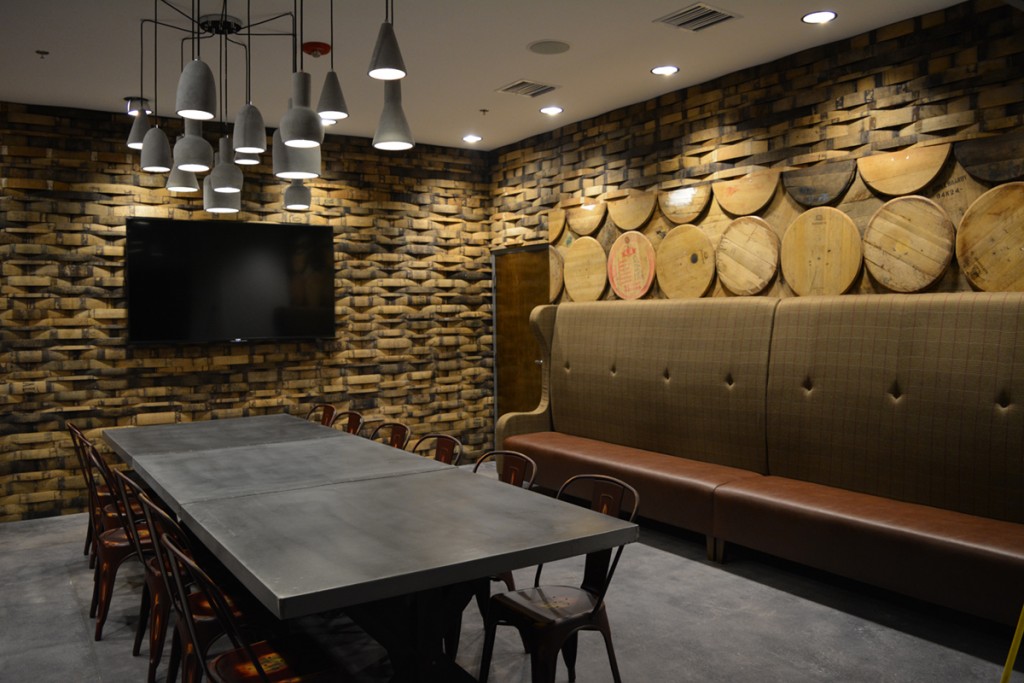 Continuing the ‘in-house’ theme, Funky Buddha transformed the brewery not only to accommodate the new kitchen but a banquet hall as well. The former bocce court has been altered to accommodate an actual shipping container that houses the kitchen. Perpendicular to the kitchen, two massive ten foot high windows allow guests to peep into the epicenter of the true brewery. On the adjacent side of the room, sectioned off by glass garage doors, is the banquet hall. Within the space, there is yet another visual portal into a different section of the brewery — the bottling process. Mirroring the process in the brewery, the banquet area has a chandelier made of bottles that contours the ceiling in an assembly line. A separate room within the banquet hall has been made to be a conference room featuring repurposed beer barrels
woven into the walls.

Evidently, attention to detail is apparent in all facets of the brewery. Funky Buddha’s unmitigated development has yet to cease. With eyes set on an endless bounty of possibilities, Funky Buddha’s team strives to grow, perfect, and above all offer an inimitable experience that surpasses all expectations.

Next Ski Rixen Continues Excellence Of Bringing Wakeboarding Access To All 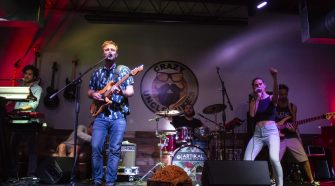