Last summer Haute Tension found the perfect exercise to test their endurance as a band. They would play 31 South Florida shows in 31 days. “It was a challenge to book it until we said there’s no limit to where you can play,” said guitarist Alexandre Merbouti. “We then tried to stay away from traditional venues. We played bowling alleys, rooftops, a roller skating rink, even as close to a basement as you can get down here. People were open to it.”

Last August Haute Tension not only met their goal of 31 shows in a month, they exceeded it. They ended up playing 34 shows in 31 nights after one gig got rained out and they accidentally double booked themselves while seeking a replacement venue. “It showed what an incredible support system South Florida has,” said bassist Monica McGivern. “Being an independent band is its own journey. Doing something like this shows there’s a lot you can get done by doing things yourself.”

The pair first met when McGivern was photographing the local music scene. “I’d moved to West Palm Beach after growing up in Michigan, and I realized I could live by the beach forever,” she explained. McGivern asked Merbouti, a guitarist she’d often photographed, if he could teach her how to play bass. After a couple lessons they decided they had to form a band and dubbed themselves, Mo’Booty. Last year they decided to change their name to Haute Tension when they were comfortable declaring themselves a real band and not just a project.

Beyond a new name in 2018, they also welcomed a new drummer, Nabedi Osorio. “We put out a call for a drummer to do the 31 shows in 31 days tour. Nabedi was the first one crazy enough to respond,” Merbouti said. It didn’t hurt that McGivern and Osorio long knew each other from volunteering at Miami Girls Rock Camp, a nonprofit that teaches girls how to play Rock ’n’ Roll. Osorio shared the band’s work ethic and they’re excited for her to join them on a planned second album. “It will be cool to write with her and explore harmonizing with three vocalists,” McGivern said.

Their self-titled debut album just came out last year. “It was songs we developed over the last three years,” Merbouti said. “Sound-wise, it’s a mash up of influences from surf to soul to blues to psychedelic to punk to hard rock. Thematically it’s very ‘film soundtrack’ influenced.” McGivern added, “We wrote it when we were living in Downtown Miami. We saw all the buildings being torn down and the Brightline being built that will bring all these people into the city. It’s the soundtrack for the development of a city.”

South Florida as a whole is a big influence for Haute Tension with both members being able to see the region as outsiders. McGivern, as mentioned before, grew up in Michigan, while Merbouti spent his formative years in California before coming to South Florida. “Where we grew up influenced us musically, like I got into punk from Detroit,” McGivern said. “But the West Palm Beach indie scene I documented is all over the album, and Miami is so much Latin and Caribbean music that it influenced our beats on the album.”

They’re hoping 2019 will continue with a high quantity of high quality shows. Might they try to test their mettle with another show-a-day tour? Neither of them hesitated to answer with a “Yes.”

Next How I Got The Shot W/ Carly Cristello 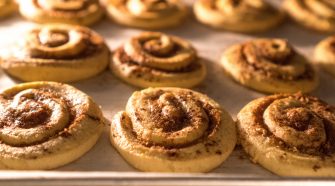