by Tom Greene of Custom Rod and Reel

We are at the end of sailfish season and there’s another 15-20 tournaments left. That will bleed into the kingfish tournaments along with blackfin tuna and everything else. The number of tournaments this time of year increase along with large amounts of fish. I personally believe there are more fish around than ever before.

The thing that’s happening in the fishing industry and the boating business is that fishermen are simply getting better—they target certain species and know where they are and what they’re biting on and understand moon, winds, tides, current, and other variables and catch more fish. For example, if they want to catch kingfish, dolphin, sailfish, wahoo, or tuna they know where and how to do it.

We are starting to target these closed season fish and the government are opening up the seasons.

We no longer have to worry about red snapper.  The genuine red snapper used to be found mostly on the west coast of Florida but now on our coast too. Tremendous numbers averaging 3-12 pounds and up to 20 pounds or larger. In the 70’s and 80’s commercial fishermen totally wiped them out. Now, the charter boat captains tell us they can go out where the red snapper are, set up a chum line and the ocean turns red from all the snapper coming to the bait. Butterfly gigs or cut bait work well. They are opening the season and the times, so you need to keep your eye on that. Some holiday weekends are open too—the government was smart enough to do that.

Even with the season closed 7-8 months out of the year, the snook are pretty easy to catch…there’s a lot of them.

There are so many fish out there we need to catch them. Some are dying of old age!

For over 40 years Tom Greene and his team at Custom Rod and Reel in Lighthouse Point have been doling out advice for fishermen, from experts to beginners.  Their shop is second to none and is your one-stop outfitter for all your fishing needs. Visit their website at www.customrodandreel.com or call 954-781-5600 to find out what’s biting, and where.  Tom will probably answer the phone himself… 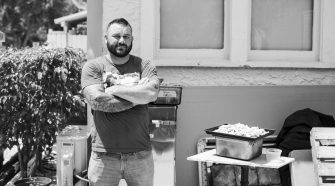