The Swatch Beach Volleyball Major Series made its spectacular return to the beach on Tuesday, starting off the 2017 season with the opening of the Fort Lauderdale Major. As teams headed to the sand for the qualification matches, CEO of the Beach Majors Company Hannes Jagerhofer was on site to launch such a historic premier.

There was a sense of great anticipation and excitement as Mr. Jagerhofer addressed a large crowd, talking about a new era for beach volleyball. “It is awesome, how many people even watched the games already today at the side courts!”

Furthermore, for the first time in Swatch Series history, the legends of beach volleyball will get to shine under Center Court. Floodlights will illuminate the whole stadium, ensuring that the action on the beach will continue well after the sun goes down.

It’s not just fans who are excited. With a smile, Olympic legend Kerri Walsh-Jennings said, “Hannes is not doing anything the normal way, he dreams big and is a great promoter for us players. I have high expectations and I am proud to be here.”

The action packed week of excitement continues tomorrow, as the stars of beach volleyball take to the sand for the start of pool play. 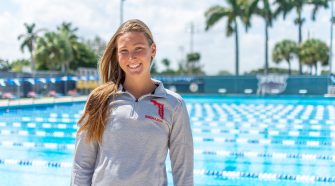