Around 1800 craft beer aficionados converged at Old School Square on May 8 at the Delray Craft Beer Festival to swill the latest creations by some of the most innovative brewers around and groove to Spred The Dub. Over 120 different beers were represented in 40 tents, including local SoFlo brews. “Fantastic event” according to Melissa Carter from Delray’s Center for the Arts. “We sold out for general admission and VIP tickets—we had 500 folks with VIP tickets kick off the event. We also had a wine tent with some really nice selections. We had a phenomenal DJ play music until 9pm and then Spred The Dub hit the stage—-lots of dancing going on!”

Local brewer Saltwater Brewing had a line at their tent for most of the day as they showed off some new releases. Melissa added that the game area was set up right in front of the stage and everyone had a great time participating. “We had more people attend than last year, it was a great crowd and everyone had a blast”.

Next year’s Craft Beer Festival will likely be held in early May. Mark your calendars now to visit delraycenterforthearts.org several weeks beforehand to secure your tickets, as next year’s event will surely sell out—–again.

Next Kapow! Noodle Bar: Bringing Niche Cuisine to the Masses 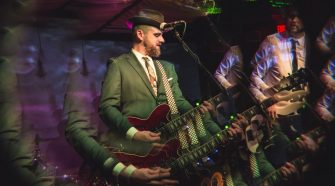