Q: What can we expect from your Soulshine concert tour? How did the concept of mixing yoga with one of your live shows come to be?

Michael Franti: I started doing yoga on tour and would go to a different studio in each town and I started inviting people to come to our sound checks. At first it was like four or five people, then it grew to around thirty. Then last summer we played out at Red Rocks in Colorado and we had twelve hundred people show up. So this summer we thought why not do this at every stop, and now we’ll play acoustically before the main show and have a big yoga jam.

Q: What was your most embarrassing moment on stage?

Michael: Wow, I’ve fallen so many times on stage I can’t even count (laughs). There was one time when I ripped my pants on stage. I always go into the audience, and I jumped off stage into the crowd and as I was climbing back on stage there was a bigger leg stretch than my pants could handle. And I stood up on stage and my pants had ripped all the way from my crotch down to my knee. So in the short run we finished the song out by following the rip with duct tape, but it was clear by the end of that song that duct tape wasn’t going to survive this. So I had to excuse myself and get a fresh pair of pants on.

Q: Given the current situation in the Middle East, tell us about your film I Know I’m Not Alone and how your visits to that area of the globe shaped your thinking.

Michael: As part of my film, I went to Iraq in 2004, which was eleven months after the war started, and I played music on the streets there. I played for Iraqi citizens in the day time and I would play for U.S. soldiers at night. After that I went to Israel, Palestine, and Gaza to do the same thing – play music in the streets for whoever would listen. The main thing, in light of the current situation, it’s really hard to understand what’s going on when you’re just watching it on the news. For example, 70% of people in Gaza live below the UN poverty line of $2/day. So you have a lot of poor people who are living under military occupation all the time. Then there’s the Israeli army, which is one of the most sophisticated and well funded in the world, that occupies them. So at the moment the Israeli army has gone in this incursion of going into Gaza with tanks, jets, and helicopters and blowing up sites that they view as being potential terrorists. Unfortunately along the way, there’s a lot of families and kids that have been attacked. Meanwhile you have Hamas, the elected government of Gaza that’s then launching these small short range rockets into Israel, and of course there’s people living in fear in Israel that a rocket is going to land in their living room. The weapons that they (Hamas) have are very limited because they don’t have a standing army. The main thing I learned when I was there, was that I met people on both sides that wanted peace and were willing to take incredible risks to achieve it. I met an Israeli woman who lost her son in the army and she had formed a group with Palestinian families who also lost children and family members. The message that they had was not one of retaliation. Their message was ‘we don’t want our family members lives used as an excuse for more bombing and more wars.’ So that was my main takeaway, that people on both sides were willing to take great risks to achieve peace.

Q: Any advice for young people looking to make a positive change in their community?

Michael: In order to change the world everywhere, start anywhere. So all of us have this finite amount of time on earth to be a difference maker, and it could be through whatever talents you have. For example I met a woman in Denver who owned a hair salon. She had told me that she saw my movie I know I’m Not Alone and was really inspired by it, and thought ‘Well what can I do as a hair dresser?’ One day a woman walked into her salon who was going through chemotherapy and needed the rest of her hair shaved. The woman wept as she saw her hair going away. They talked and the owner decided that every Thursday night she would open her salon up to take care of the beauty needs of women going through chemo. And I thought that was such a great example and spirit of that – somebody that says ‘this is my talent and this is what I know how to do, and I’ll somehow find a way to give it back to the community that I come from.’ I really feel like that’s the way that the world changes.

Q: What are a few of your favorite essentials you bring on the road?

Michael: You know, this may sound ridiculous but the most important thing for me on tour these days, apart from my passport, is really my phone. It sounds kind of cheesy, but I started touring at a time when we would have to stop at truck stops to use pay phones in order to talk with my family. It was hard, going days without speaking to them. Then email came in and made it a little easier – I could write letters once I got set up in a hotel or somewhere else where I could get online. But now it’s really an amazing thing to be able to facetime my son and be able to text him and send pictures back and forth. It sounds horrible but my phone is really important to me for those reasons. The other thing is I always keep a guitar next to my bed on the tour bus, and I wake up in the middle of the night or first thing in the morning and I write songs. Creativity is fleeting – there are these moments when you have an idea, and if I don’t get it recorded right away I might lose it forever. So I’ll pick up my guitar and record things into my phone. The third thing would be my Vitamix blender so I can make a smoothie in the mornings to start my day.

Q: “The Sound of Sunshine” is a song that just about everyone has heard. How does it feel for your music to reach that many people and did you ever think that was possible?

Michael: No I never did. My first band put out a record in 1987 and we never really had a “hit song” until 2010. So 23 years into making music before that happened. It was never really my intention when making music, I just wanted to speak about what was in my heart and things that were important to me. But I guess the way that it makes me feel today – I remember when I was a kid I would take these horrible car trips with my parents. There were seven of us and we would pile into this station wagon and drive forever. The only thing that would keep us kids from pulling our hair apart was the radio. The songs that were on the radio meant so much to us. They became a part of my life and when I hear those songs today, it takes me back to those memories and my childhood. That’s the best part about having a song that people know like “Say Hey, I Love You” or “Sound of Sunshine” is that it becomes part of peoples’ trip to the beach, it becomes part of their 4th of July, it becomes part of their wedding, or the song that they listened to during their drive across the country or whatever it may be. It means a lot to me that my music is that, in the same way that other songs were that for me and still are to this day.

Q: Any message for your fans?

Michael: We started a foundation, me and my girlfriend, last August called Do It For The Love Foundation. It’s like a Make A Wish Foundation for music. So we get people in advanced stages of life threatening illness, kids with severe challenges, and wounded veterans to live concerts. At all our shows we have families from those places, but if anybody wants to go to any show in the country just write to us at doitforthelove.org and we’ll help you or your family member. Last week we had someone go to a Dave Matthews show and a Santana concert, so it can be any concert in any city.

Visit www.doitforthelove.org to support this great cause. Also be sure to check out Ca’ Momi, who has made the Do It For The Love California Red Wine and Do It For The Love California White Wine, with 100% of the profits donated to the foundation. Big thanks to Valentina for letting us sample some of their awesome wine backstage and to Michael for taking the time to chat. 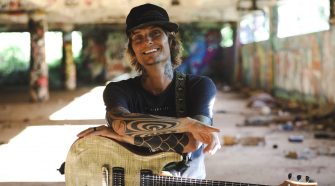