While the majority of South Floridians purchase dinner at a grocery store, there are some that clothe themselves with thick camouflage and, with an underwater gun in hand, jump into the oceanic abyss off our coast. Sometimes 60 feet down, and sometimes coming face to face with wild, biting animals, the product of their exploits awaits them on the dinner table…if they are successful.

Once you see their white lips, get ready to shoot.”

Alex Schulze knows this. He’s 23, has a college degree, and this is not his first time spearfishing for Cobia in open water, but he’s reminding himself of the sight because after the Cobia’s silhouette lightens, its lips look nearly white, to Alex. Now he can see the scenario. He’s kicking 30 feet below the surface, staring down down down into the blue Atlantic abyss and suddenly a few silhouettes appear, swimming up up up and he kicks harder to meet them, Riffe speargun with black bands cocked and loaded, aiming, aiming, waiting, waiting…

The boat’s engine roars to life and shoves him back into reality. The 21-foot Seacraft he’s gazing blankly towards needs to be loaded with afternoon supplies.

It’s noon on a Saturday in February and the feeling in the air is too tense for a typical Saturday in February. Cobia? Alex has no fear of the brown colored fish, even if he did see one later that afternoon heavier than the current 130 pound record (which he didn’t). Fearful of spearfishing and freediving 40, 50, even 60 feet? Nope, he’s done that. It is the sharks that has everyone – including fellow spearfishermen and friends Christian Rec, Mike Wood and Rob Ruiz – feeling a bit uneasy. They too have done this before, because it’s how spearfisherman put dinner on the plate in South Florida sometimes daily, sometimes weekly. But still. Bullsharks.

But Alex knows this too, so as the boat churns away into deeper water, he thinks of nothing but the scenery. Eclectic mansions dot the intracoastal owned by bons vivants and there is loud traffic in the channels. Everyone else is letting loose on this Saturday in February but not this group because these men are spearfishermen and they are going hunting. They are going to war.

Even though the temperature is strangely warm, Alex shivers. The boat picks up speed out of the Palm Beach Inlet and the sea spray from the open ocean only makes it colder. As the boat
heads northeast, Alex scans the deck for a mental checklist: he sees the teak spear guns with black bands, buckets of chum, wetsuits, fins, snorkels, weight belts. His eyes then reach the ice chest, and he knows that it is empty besides the ice that fills it and that shoves his mind into the dark sea below the bouncing boat. He’s visualizing it again: “Once you see their white lips, get ready to shoot.”

Thirty minutes later, the boat’s engine slows, the chum flies, and from a distance the scene looks like that of a miracle – a boat puttering in patches of red wine above the Jupiter ledge.

When suited up, Rob, Christian, Mike and Alex all look like characters out of a Minecraft video game because their wetsuits are green and blue in jagged formations. Their fins are dark colored, and their masks are black. They are camouflaged and they are ready.

The boat is rocking, the wind is whipping, the engine is softly puttering, but it all disappears when each spearfisherman jumps in the water. It is quiet and cold on the surface and it is obvious that this is the calm before the storm. Alex blows bubbles and looks down. He can see down 40 feet easily, but it is nothing besides blue rays vibrating in the quiet.

“Once you see their white lips, get ready to shoot…” He knows, he knows. Flashers are deployed, and the group dives down stiffly, just as silhouettes are rising from the deep. Alex sees two Bullsharks in the distance, then two more, then…many. Maybe 8, maybe 10. All looking for the blood in the water. The men stay tight and close, and Alex knows the prize, the Cobia, are coming.

Alex begins to see white lips. A colony of Cobia, maybe 10, 12 are below and Rob takes the first shot. Alex hears the metal sliding through the water and knows there is blood and just like that the underwater world explodes. Rob kicks in calm and quick strides up up up and Alex and Christian and Mike turn into defenders against the blood drunk bulls trying to take a bite from the former Cobia groupie. They kick, threaten, swing, looking like participants in an underwater dance contest. Alex hears the engine roar to life above and by the time he reaches the surface for another breath the driver is hoisting the Cobia in the boat.

Now Alex is triggerhappy. As he slides into the deep, kicking down down down, he no longer feels cold. Suddenly, he sees white reflecting off the previously deployed flashers and he moves his aim with the Cobia. Aiming, aiming aiming…he pulls the trigger. He hits meat. The world under the surface explodes again.

Bulls swoop in, but Christian and Mike and now Rob are there. Protecting. Defending. Alex kicks up up up and reaches the surface and screams “BOAT! BOAT!” and suddenly the driver swings the boat around and zips closer, hopefully deflecting a snorting Bull or two as the fish bleeds. The Cobia is flapping, but isn’t acting as wild as the blood drunk Bulls…yet. As Alex pulls the Cobia within a few feet, the fish catches wild and twists and jerks and contorts and bleeds more. Alex is now at the surface and out of breath and the fish is hoisted up into the boat. Watching from the surface you almost get bored as the world and its inhabitants below show their true nature over and over again. This happens until the team reaches their limit for the day and they climb back into the boat hot and drained and hungry and as they rest on board again the sun no longer hits their eyes. The breeze is cool.

Tonight, Alex, Rob, Christian and Mike will use the ride back to rest, then they will wash the wetsuits, clean and hose down the boat but there will also be spoils of war, specifically their limit of Cobia, and that is why the group will do the exact same thing in few days. That is why hundreds of other men and women across South Florida will do the same thing, day after day. This is their life. Danger is often their toil, and pleasure is often their result. And until that next trip, Alex will daydream of those slithery silhouettes that exist beneath the surface.

Next Party Pics from 2 Georges at The Cove 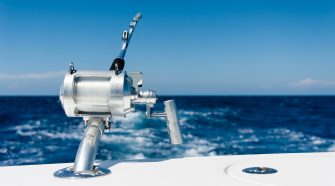