Makes The Ocean Her Canvas

Growing up in South Florida, the ocean was always on Carly Mejeur’s mind. The longtime surfer and one-time lifeguard for Palm Beach County Ocean Rescue was unfailingly inspired by the big blue expanse, even if it took a while for her artistic skills to catch up with her aquatic admiration. “I was a pretty intense child,” Mejeur said about her early artistic attempts. “I knew what I drew didn’t look like what I was looking at, and wasn’t happy about it. Much of my childhood was trying to get my fine motor skills to catch up with what I was trying to recreate or invent.” 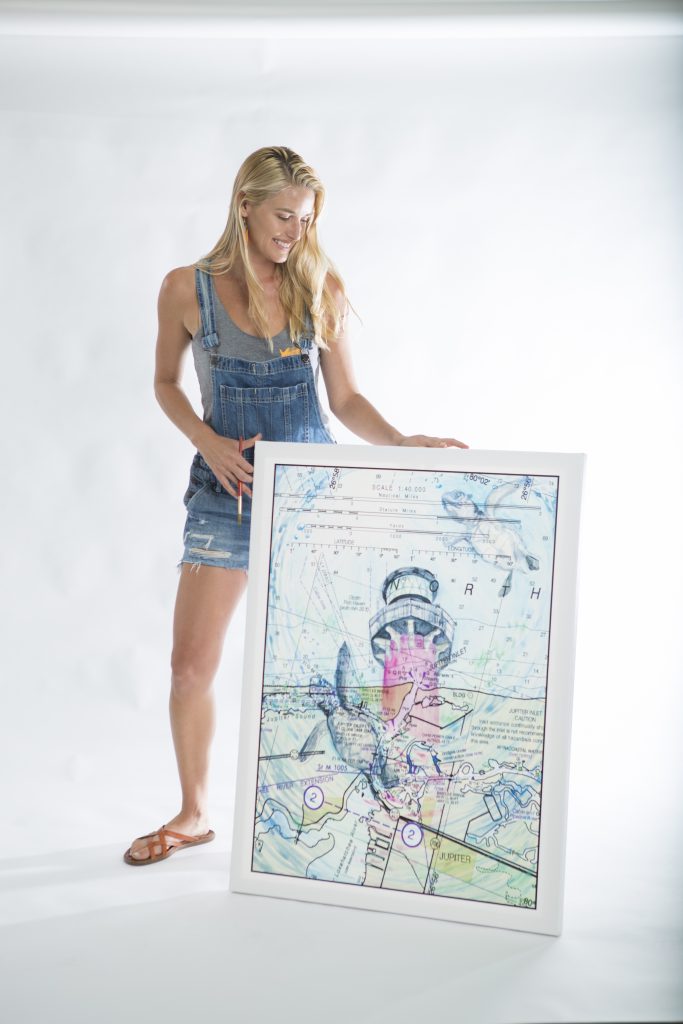 After attending the Maryland Institute College of Art for painting, and eventually receiving a masters in art education, Mejeur returned to her home state and decided she could finally do the ocean of her youth some artistic justice. Her current work, The Nautical Chart Series, is a series of paintings on nautical maps connecting marine life with particular locations. Once she started the project, Mejeur said she became a magnet for nautical maps. “It started with my best friend’s dad, who was a treasure hunter with Mel Fisher. He had so many great stories and tons of nautical charts. He let me borrow them to experiment and I eventually made one for him that represented his life stories, and could become a family heirloom for my friend. After that, people were so happy to get rid of their charts because they didn’t just want to throw them away! This one guy brought some to me in the back of his truck, and it must have been 25 pounds piled up.”

The Nautical Chart Series has been one of constant evolution for Mejeur. “The first one was a two-piece canvas that I had glued the chart to, and then painted on. Then, I covered it with gel medium and painted the edges. I tried a few more after that with epoxy resin, wood stains, gold leaf… I tried it all. I ended up simply presenting the authentic chart originals between two pieces of glass. The watercolor made the charts wrinkle, so I had to keep working on my technique and display until I was happy with the result.” Beyond the aesthetic appeal of the artwork, Mejeur hopes it also brings more awareness to ocean conservation. “Through painting on a nautical chart, I’m literally connecting the man-made lines, titles, and numbered depths with the natural coastlines of the earth by painting translucently across them with watercolor. 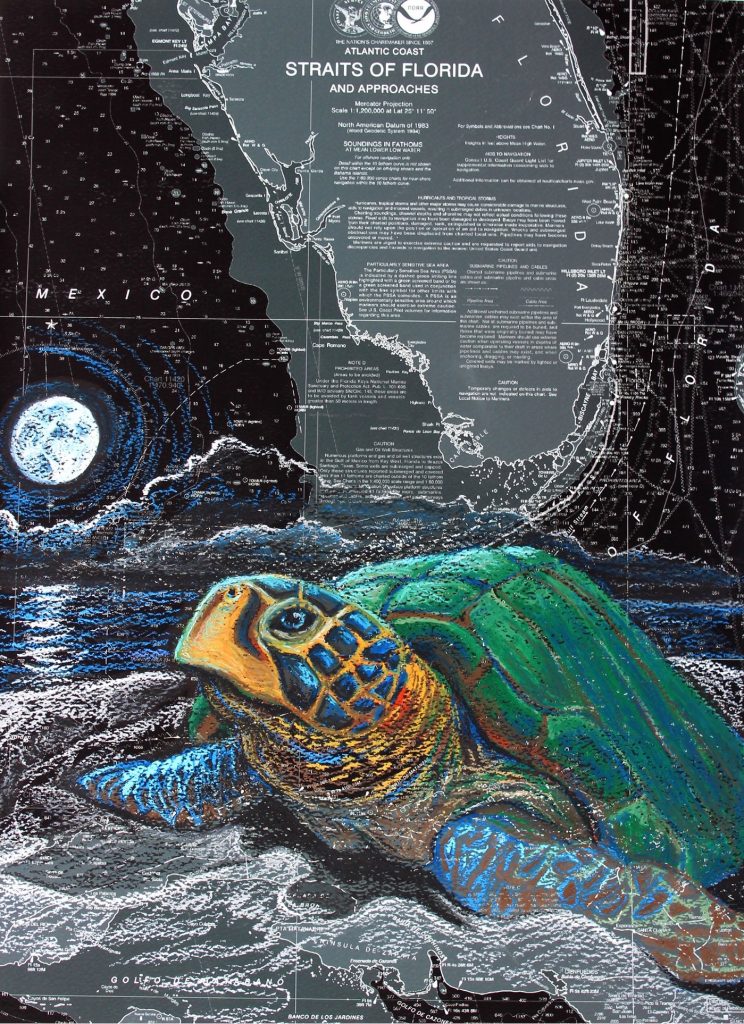 The sea turtle, octopus, or trunkfish becomes seamlessly a part of the background, and reminds us that it belongs there. I think my style, though realistic, is still a little airy, and dream-like. Will you one day be looking at my work as charts, which most people no longer use, with a fish that no longer exists? It’s so morbid, but extremely possible. I also really try to bring a personality to each subject. I think that the character of the pose, the imperfection of the shell or tail fin, the twinkle in his eye, all create a connection that help people feel the love… and we protect what we love.”

As the mother of two young boys and as an artist whose work has been enjoyed by a large audience, Mejeur has the perspective to relish every success, including the Pelican Grand Beach Resort in Fort Lauderdale featuring her work in 154 units of the hotel, to an overwhelming amount of requests for commissions. She stays humble through her muse, the ocean and her maps, which provides her artistic self with just as much fulfillment and as many challenges as surfing its waves does. “Painting on a nautical chart could be a battle with the background or a dance. I aim for the harmonious dance, where the painting and the chart look like they are feeding off each other so that you are constantly seeing a different relationship forming. A new connection is unveiled at every cross-section.”

Comprehensive Guide To Lake Worth 4th of July 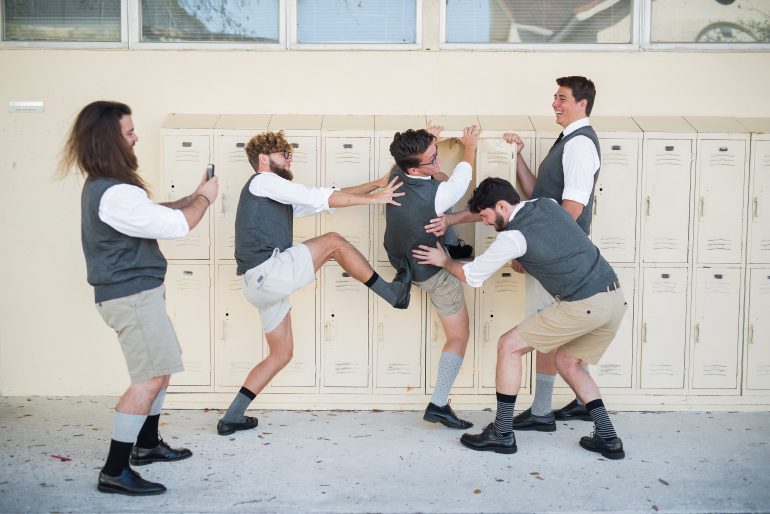