Every once in a while when Fabiana Delfino heads to the skate park, she’ll still get a heckler. “When I was younger, I felt I couldn’t escape someone yelling ‘Girl Power’ or ‘Skater Girl’ in a condescending way trying to get in my head and ruin my vibe.” The insults always ended when she got on her board. “They keep their mouths shut when they see me skate.”

The twenty-year old business management major at Palm Beach State College first picked up a board as a nine-year old girl in Boca Raton. “My brother would skate around the neighborhood with his friends. I would come along but on rollerblades. But I liked the challenge of skateboarding. At first, it was just something to do to get from point a to point b in the neighborhood.”

Skating came easy to Delfino, but that doesn’t mean she hasn’t had her falls and scars. Among her injuries have been countless ankle rolls, two fractured wrists and a pair of broken thumbs. But as soon as she heals, she’s back on her board. “Just the other day I was going fast and a kid came out of nowhere to get in my way. I was setting up for a trick about to go up a ramp and I slammed straight into him and got a shiner on my shin.”

Except for the endless parade of injuries, Delfino’s family has been very supportive of Fabiana as she’s followed in her brother, Pedro’s, footsteps of becoming a sponsored skateboarder. “At first, my parents thought it was just a hobby, but they love that I’m following my passion. They’re stoked when I’m happy.”

Among her happiest moments are when she’s doing variations of her trademark trick of an ollie onto a ledge into a nose manual. Technical tricks of that sort are where Delfino thinks she excels. Whenever injuries permit, she spends several hours a day honing her craft on her board. She grew up at Boca Raton’s Tim Huxold Skate Park, learning the terrain on her rollerblades even before she skateboarded. Now you can usually find her at Fort Lauderdale’s Ramp 48 Indoor Skate Park, and when doing street skating she prefers to head south to explore Miami. It’s on the street, not when she’s high up in the air that fear comes into play. “I’ve gotten too close to some moving cars. I’ve definitely had some near death experiences.”

Her highs tend to come from the rush of competition. When we spoke, she was gearing up for the Wheels of Fortune competition held in Seattle, Washington, which she hopes could qualify her for the X Games. “You have three skaters on the course at once for five minutes where we skate simultaneously. I go in there with a run planned, so I don’t forget what to do during the heat of competition.”

Though she has plans after a skating career to start her own business, in the present Delfino is proud to be a role model for young girls to pick up a skateboard. “I get looks being a girl. People don’t see girls skating, much less a girl skating like me. Growing up I had role models in Elissa Steamer, Vanessa Torres, and Lacey Baker who skated and killed it. I hadn’t planned on being an inspiration. If I am one, that is very flattering.” 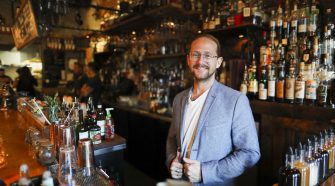