“I attended Palm Beach Atlantic University in West Palm Beach, studying journalism, from 2010-2014,” said Cash Lambert, 27, author and avid surfer. “At PBA, you have to attain a certain number of volunteer hours every year. I stumbled across Surfers for Autism searching for volunteer opportunities in 2010. Not only did I volunteer, helping push children with autism into waves, I also began to write articles about the events because I found them so impactful.”

But, his articles were dictated by word count and even though he was sharing his stories in publications such as (yours truly) The Atlantic Current, Autism Parenting Magazine and Eastern Surf Magazine, he had many more quotes and stories to tell. When someone told him he should write a book, he jumped on board.

“Every person who’s read it has told me that it made them cry,” Cash said. “My running joke has been that if the book doesn’t make you cry, we’ll give you your money back. Of course, I don’t have the power to do that, but that’s been the consensus so far, that the stories in the book have been truly inspiring.”

“Waves of Healing” features stories about the struggles children with autism face, including the struggle to stand on a surfboard, the struggle to communicate, and the struggle to make progress in a world that accepts “normal” and rejects all else. But it’s also very hopeful. There are stories of breakthroughs, of authentic joy and unbridled excitement as they learn to see their world from a new perspective, which is happily standing tall atop a surfboard and riding a wave all on their own.

“For those who are touched by autism, I hope [the book] inspires them to keep going and to never give up as they search for pieces to the autism puzzle for their son or daughter,” Cash said. “I also hope it motivates people to act. To move. To volunteer. To give of themselves to a cause. It doesn’t have to be for autism, it can be any cause. When you give yourself to something expecting nothing in return, amazing things can truly happen. Just ask SFA volunteers.”

“Stand up, up UP!” is the mantra of Surfers for Autism, and a reminder to us all that perseverance and faith can help in all aspects of life, including a three-year goal for writing a book about a subject he’s passionate about. He said that helping a child surf, seeing the child smile and have fun, watching his/her parents cheer, and then having the parents endlessly thank him is an experience he won’t forget.

“Waves of Healing” is published by Hatherleigh Press in partnership with Penguin Random House, and is out now. It is available everywhere books are sold, including Amazon, Barnes & Noble, Target, Walmart, and also internationally.

Next Interview With Brian Fox 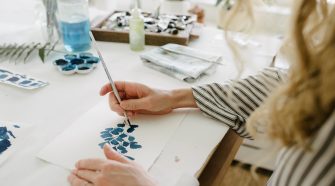