Maybe it was because he was born in landlocked Minnesota, but photographer Darin Back has always been fascinated by the beach and the people who spend their days there. When Back’s family moved to Florida, many of his school friends ended up being surfers. “I knew so many from when I was in high school,” Back tells Atlantic Current. “A lot of them continued to stay at the beach, start surfboard companies, open small restaurants, make art and fish. I have never seen any pictures of them. I wanted to create an iconic image of them to last.”

With his new hardcover book of black and white photography, East Coast Surfers, Back did just that. The new book, now available for purchase on Amazon, features close to seventy portraits taken by Back of Florida’s surfers. It features a wide diversity of humanity going way beyond the stereotypical beach bum surfer dude, though a couple of those stereotypes are included as well.

The book was a labor of love for Back, “My process for the book in creating the images was to be consistent with my background, lighting and composition. It was pretty easy putting the book together because I could already see it in my head. That really helped a lot to storyboard the entire thing once I had all the images and bios.”

From his Cocoa Beach home, Back has always been a student of surfing photography. “There are too many surfing books to mention. My main inspiration is legendary photographer Richard Avedon. His work, The American West was a turning point for me. His real, in your face photographs are stunning 40 years later.”

West Coast or East Coast, Back thinks capturing surfers requires a respect for their passion. “I think all surfers would stand out the way I shoot my images. I don’t think there is a difference in where you live or your surf break, it’s about surfing and its culture. Florida has a rich history of surfing. The hard work it takes to surf small waves, accomplishing a lot with little to nothing.”

Also included in East Coast Surfers is a two page foreword written by Robert T. Oldham, and short bios for each of the portrait subjects that will have you flipping back and forth through the book. Back was amazed by how many surfers were open to being part of the project. “After a few sessions, a lot of the surfers reached out with information on other surfers who I didn’t want to miss. Of course, I didn’t get enough. Sometimes through bad communication we just couldn’t make it happen.” Sounds like that might be an excuse for a sequel to this book. 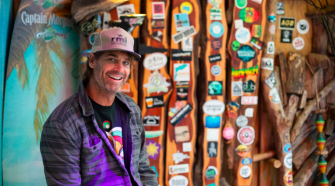